Opening Day of Trout Season Means More Than You Think 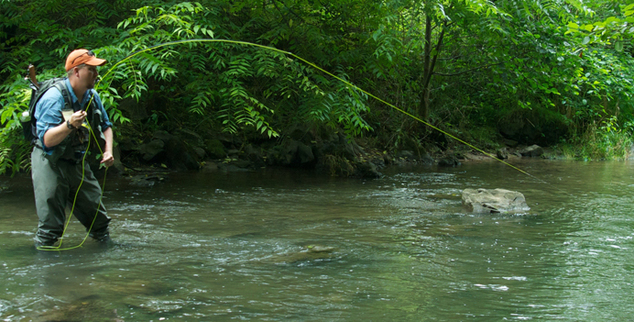 The outermost edge of interstellar sanity.

Or perhaps, maybe it's actually the first stop on the train to Crazy Town. I dunno. The jury is still out. But one thing is certain and I stand by it right here and now, people.

Trout fishers are a little touched in the head. I mean, for most trout fishermen and fisherwomen there are no in betweens. You wake up early, you freeze your begonias off, you miss the big ones, you miss most of the small ones, and all the while you breath in deep drafts of cool mountain air. Or Bellefonte air. Or Milesburg air, depending on where exactly you end up fishing that particular day, you know? Either way, you breath in deep satisfying gulps of the outdoors and tell yourself one thing and one thing only. The same thing the guy over there in the full camo is telling himself. The same thing the old lady over there (in full 1920's Woolrich) eating cold baked beans out of a can is telling herself.

Trout fishermen and fisherwomen, you see, they don't mess around. They buy a lot of gear. They bring a lot of gear to the stream. And they hurl a lot of gear into the sky and into the trees hanging over the stream, and sometimes even into into the stream itself, all in this almost ancient kind of ritualistic attempt at outfoxing a trout in the name of connecting with something primal, something pure and untarnished by these iffy modern times.

Still, all that said, you can believe it or not, but truth is: there are a lot people who adore trout (and catching them)- and by 'adore trout' I mean they get absolutely giddy over the idea of even a teeny tiny brookie the size of one of those microwavable breakfast sausages you make for the kids, the sort of people who pepper their Subarus with stickers of trout silhouettes and expensive fly rod companies- who also would rather suck a tail pipe than ever be caught dead on the banks of any stocked local stream or lake on the opening day of  trout season here in Pennsylvania.

They are the purists, I suppose.

Typically fly fishermen, they stand united in their rather universal disdain for anything involving actual live bait (or GOD FORBID! marshmallows! corn! NOOOOOO!) or possibly killing a trout or five for dinner that night. Even if they are just 'stockies' that were dumped into the waterway from a bucket just last week. And I get it. I do. Heck, in the spirit of full journalistic disclosure: I am a fly fisherman myself, albeit a rather horrendous one.

But whatever. I understand. I can grasp where the one side is coming from when they begin to get all riled up at the mere thought of being out there in the middle of it all on the trout opener here in PA.

That day, you see, if you've never been privvy to the experience, is a day like none other in the annals of nature. For each year, for at least the better part of the last century, I'd surmise, thousands and thousands of people from all backgrounds and walks of life all descend on colder cricks and streams all over Central Pennsylvania and the rest of the Commonwealth in pursuit of, how do I say it?.... certain joys and gifts wrapped up to look like a wee silver fish. A fish known around these parts as being sly, wise, and sort of finicky when it comes to chomping down flies or the baby night crawlers I buy at the gas station up the road from my house.

And the day, as wonderful as it may turn out for you- and I sincerely hope it does- is a day that is rarely....and I mean seriously RARELY....the kind of day that most people close their eyes and dream about when they're sitting in the office or daydreaming in traffic about just escaping the daily rat race for a little time in the outdoors. For a little taste of paradise.

Unless, of course you really dig watching old ladies in full Victorian Woolrich eat beans out of a can. OMG. They ARE beans, right?! Please tell me they are not worms!!!

Listen, in all honesty, the opening day of trout season in Pennsy is probably unlike anything you've ever witnessed in your entire life. If you've never been lucky enough to experience it. I'm gonna set you straight here, okay? This is not about fishing so much as it is about the fading art of tradition. The opening day of trout on the streams and lakes of Centre County? It's kind of like a frozen time capsule; it could be 1945. Or 1975. Or 2005. Not much changes on that Saturday about halfway through April except the look of the cars and pickups lined up for miles alongside the narrow country roads that run directly beside a thousand different little trickles with names like Skunkkisser Creek. Or Elk Berry Run. Or Roaring Frozen Creek Run.

They are streams named many moons ago by men and women who are long gone, forgotten on the winds of time. But these streams, these places where Fish Commission hatchery trucks roll up to in late March, pull over, dump a bunch of buckets of pellet-raised trout in, and roll on: they are very very important places to each and every one of us. Even if we don't get it. Maybe especially then, if I'm telling the truth.

Because these are OUR places, you see. Accessible to us, the public, in a world where more and more land and water is being posted with NO TRESPASSING signs. Keeping you and your kids far away from trout is something more than a few people in these parts would love to do. And they're working on that, night and day, even while most of us have no idea all we stand to lose.

Pennsylvania. Central Pennsylvania. Our heritage scattered behind us like random gusts of fallen leaves, blowing all over yesterday's road in our rearview, what does it even mean at all? Why should we even care about being allowed to plop down on a bucket on a chilly morning in April, after a long winter of snow and ice? Why should we care about dragging our snotty kids down to the semi-frozen banks of Little Deer Run or Fat Bear Creek, fishing vests bulging with jars of hot pink salmon eggs and beef jerky and toilet paper and plastic bobbers and Rooster Tails still in the package from Walmart and a can of Mountain Dew and Devil Dogs and the same old rope stringer your grandfather used to stick down hard into the mud in that exact spot where you're standing right now- watching your kids fling mealworms at each other- way back when, before all that has happened and past?

Why the heck should a man or woman who has a healthy and dignified respect for trout, and likewise for the more genteel approaches to landing them in a sporting manner that doesn't involve baiting a size 6 barbed hook with a wad of Original Slim Jim, ever give a squirrel's turd about whether or not this opening day of trout tradition lives on for generations to come or dies a quick and sudden death at the hands of a rapidly changing world where wild trout and native trout are all that matter?

I'll tell you why, hoss.

Because once upon a time, long before all the pricey Simms gear and the fly tying station you've had built into the back of your SUV, you were just a kid with booger bubbles blowing out your left nostril, standing there in the cold grey dawn, counting the seconds until the fishermen up and down the stream hollered and whooped and casted their lines at long last. 8am sharp and you were there. Shivering. Excited beyond description. Worm dirt all up in your nails, your dad standing there staring at an ancient woman eating beans from a can like she was born out on the Oregon Trail and dropped right there beside ya's. Streamside. Her line in the water tangling up with yours.

Her past all tangling up with your tomorrows.

The two of you, young and old, probably never see each other again. Except maybe next year. Same trout time. Same trout channel. Right there on the banks of Canned Corn Run. Making memories neither of you will ever forget. And protecting us all from something down the road. I have no idea what. But theres got to be something. Because that's just how important all this trout chasing is, you see.

Even if you don't catch nothing but a cold.

Experience More of Bellefonte in the Story Archive